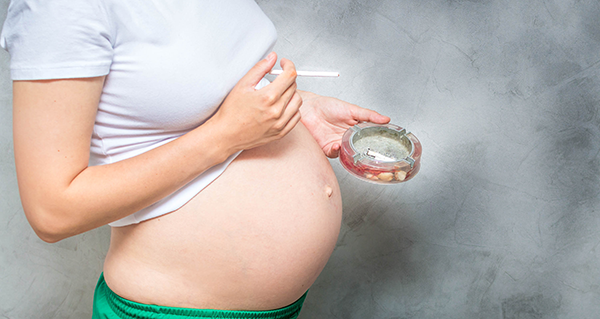 Vaping nicotine in pregnancy is more effective than nicotine patches and does not appear to be more harmful, according to a landmark study published today in Nature.

The randomised controlled trial of 1,140 pregnant women at 24 hospitals in the UK compared vaping a refillable vaping device (n=569) to nicotine patches (n=571). Only minor support was provided for both groups. The trial was led by Professor Peter Hajek from the Queen Mary University in London.

At the end of pregnancy, 10.7% of women who vaped-only were abstinent compared to 5.6% of those only used nicotine patches.

Importantly, mothers who vaped had significantly fewer infants with low birthweight (<2500g) than those using patches. Low birthweight is associated with higher risk of death and poorer health outcomes in the child.

Side-effects were similar in both groups

Vaping was more acceptable to pregnant women than using nicotine patches. Forty percent of women who used vapes used their product for at least 4 weeks compared to 23% using patches.

Why is this study important?

Smoking is the leading cause of harm to the mother and fetus in pregnancy. Smoking can increase the risk of premature birth, miscarriage, neonatal death and the baby having a low birth weight.

Nicotine replacement therapy is approved in pregnancy but is not often used. This is partly because of exaggerated concerns about the risks of nicotine. However,  there is no evidence so far that it causes harm in humans although it has been found to cause harm in animal studies.

Quit rates with NRT are usually very low in pregnancy, because nicotine is metabolised faster in pregnant women due to the higher hormone levels. Higher nicotine doses are needed, but are rarely used.

This study found that vaping was more acceptable and enjoyable than NRT and is more likely to used if available.

Most importantly, smoking women who switch to vaping in pregnancy have healthier babies (lower rates of low-birthweight) and are more likely to quit than from using nicotine patches.

According to Professor John Britton, Former Chair of the UK Royal College of Physicians Tobacco Advisory Group (who was not involved in the study):

Women who are pregnant and who have not been able to quit smoking should therefore be encouraged, as strongly as possible, to switch to vaping

Based on the findings of this study, the researchers recommend that vaping is a valid treatment option for women who smoke in pregnancy and are unable to quit on their own.

However, because of the potential risks of nicotine, pregnant women who do not smoke should not vape either.