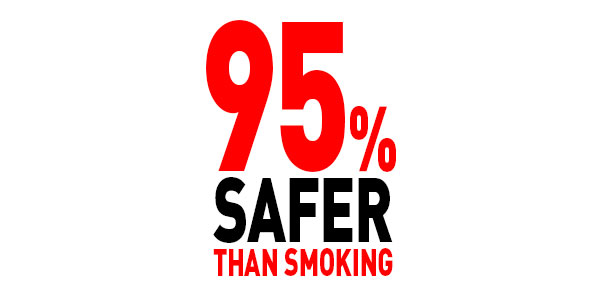 Is vaping safer than smoking?

In spite of what you may read in the media, vaping is now established to be a far safer alternative to smoking. This webinar I gave recently at the National Drug and Alcohol Research Centre at the University of New South Wales summarises the scientific evidence on nicotine and vaping and addresses the popular misconceptions.

Nicotine is addictive but relatively benign. It does not cause cancer or lung disease and only has a minor role in heart disease. Here is what leading health organisations say about nicotine:

Long-term use of nicotine has not been found to cause any significant health effects.

There is no evidence that nicotine harms the human adolescent brain. Reports of harm are based on rat and mouse studies.

The positive effects of nicotine include

Is vaping safer than smoking?

This is because most of the harmful chemicals in smoke are absent from vapour. Those present are in much lower levels than in smoke.

Levels of toxins detected in the urine and blood of smokers (biomarkers) reduce dramatically when they switch to vaping.

After switching, breathing improves asthma, and emphysema get much better and lung infections reduce. The risk of heart attack declines and blood pressure falls.

The risk of cancer from vaping has been estimated to be 0.4% of the risk of smoking.

There is no identified harm from passive vaping.

Popcorn lung is a myth. There has never been a case of popcorn lung from vaping or smoking.

The outbreak of serious lung disease and deaths in North America in 2019-20 was due to THC vaping oils contaminated with Vitamin E Acetate, not due to nicotine vaping.

Although the precise long term risks of vaping nicotine have not yet been established they are certain to be only a tiny fraction of those from smoking, which kills prematurely up to 2 in 3 long-term users. 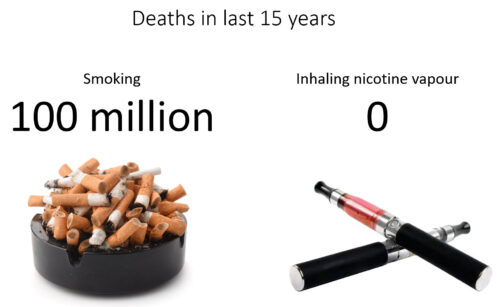 Based on this information, the estimate that vaping is 95% safer than smoker is a very reasonable guide.