Young people should not vape or smoke. They should also be given accurate evidence-based information to help them make informed choices. The NSW Health ‘Do you know what you’re vaping?’ campaign is alarmist and provides many misleading and inaccurate messages and is bound to flop.

The misinformation starts at the top. The Minister for Health, the Hon. Brad Hazzard showed a complete misunderstanding of vaping, unreservedly stating at the press conference that vaping is worse than smoking:

Some of the other more egregious and misleading statements are challenged below.

"Vaping has been linked to serious lung disease"

This is deliberately misleading.

EVALI, the serious outbreak of lung disease in North America in 2019-20 was caused by vaping illicit THC oils adulterated with a cutting agent, Vitamin E Acetate.

Some studies have found worsening asthma, cough and lung irritation in teen non-smokers who vape. But others found no effect, including a recent study of over 21,000 US teens which indentified 'no independent association between e-cigarettes and functionally-important respiratory symptoms'.

This is true but very misleading.

Kids who try vaping are more likely later to try smoking, but this does not mean vaping caused smoking (the so called ‘gateway theory’), which this implies. The most likely explanation for the association between vaping and smoking is that young people who experiment with vaping are more prone to also smoke because of common personal, environmental or genetic reasons, ie taking ‘kids who try stuff, try other stuff’, also known as 'common liability'.

Some young people who would have smoked are taking up vaping instead. This is known as the ‘diversion theory’ and is consistent with the rapid decline in youth smoking in the United States and United Kingdom since vaping became popular.

The most recent study of 37,000 16-24-year-olds in the UK, concluded that the use of e-cigarettes was not associated with increases in the uptake of smoking in this age group.

In the US now, where vaping rates rose sharply for several years, only 1.9% of 15-18 year olds now smoke and <0.4% smoke daily. Vaping rates have also fallen dramatically recently. 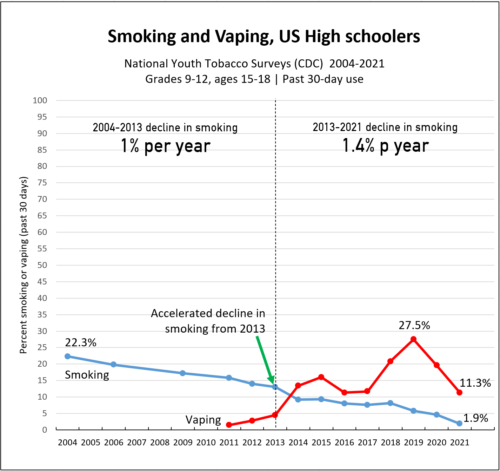 In fact nicotine has a calming effect and improves mood and many people use nicotine to reduce stress, improve mood and help them cope with life

"Nicotine is harmful for the young brain"

Probably wrong. There is no evidence so far that nicotine harms the human brain in adolescence. Concerns of harm to brain development from nicotine are based on rat and mouse studies. However, laboratory tests often use unrealistic doses in an artificial setting and animals often respond differently to humans. Animal tests generally ‘fall far short of being able to predict human responses.’ However, further research is needed to identify any possible long-term effect. 'Adolescent mice should not vape nicotine'

If nicotine is harmful to adolescent brains, we would expect to see some ‘epidemiological’ evidence for this in the hundreds of millions of adults who smoked when young compared to never-smokers. However, no evidence has been found.

Nicotine patches and gum are approved in Australia from the age of twelve and can be purchased from supermarkets and petrol stations.

"Exposure to nicotine can impact memory, attention and learning"

Nicotine has other positive effects which may benefit young users. It improves ADHD, relieves stress and improves mood, helps with weight control and releases the pleasure hormone, dopamine.

Wrong. It is rare for young people who have never previously smoked to develop nicotine dependence from vaping although it does occur in some cases.

Many studies have shown that vaping nicotine is less dependence-forming than smoking. Furthermore, most non-smokers vape infrequently. Infrequent users are less likely to develop nicotine dependence than regular users.

Vaping likely addicts some young people to nicotine. However, according to leading UK researchers, the evidence does not suggest it is addicting very large numbers.

"Data . . . do not provide support for claims of a new epidemic of nicotine addiction stemming from use of e-cigarettes"

Only 3% of young non-smokers in this study who vaped reported being nicotine dependent (smoking within thirty minutes of waking).

The UK Royal College of Physicians reported in 2021 that

True, but emotional and exaggerates the risk. There are toxic chemicals everywhere in the environment, for example 18 carcinogens in coffee. The key question is whether the dose of toxins is sufficient to cause harm.

Vapour contains a small number of chemicals (generally less than 100) at low doses, mostly at levels below occupational or environmental health standards. It is possible that some risks may appear in the future from these small doses and it is better for non-smokers not to vape. However, the risks of harm appear very small and need to be kept in perspective, not exaggerated.

"Vapes are often labelled incorrectly and can contain nicotine"

True. This is a consequence of Australia's current de facto prohibition of vapes. The difficulty in accessing vaping products without a prescription has led to a thriving black market with unregulated and mislabeled products sold freely to children.

The solution is to comprehensively regulate nicotine vapes so safe products are available legally for adult smokers from licensed outlets and access to young people is restricted, combined with strict enforcement. The black market will then diminish and sales to kids will fall dramatically.

Have we learnt nothing from the war on drugs? Bans and harsh restrictions don't work. If the demand is there, people will find a workaround and we invariably end up with more harm.