New Zealand (Aoteaora) has today released an ‘aggressive’ action plan to be smoke-free by 2025. The goal is to reduce daily smoking in all population groups to 5% or less.

1. Reducing inequalities with a special focus on disadvantaged groups with high smoking rates, such as Maori and low socio-economic populations.

2. Introducing a ‘smoke-free generation’ with new legislation next year which will prevent anyone born after 2008 from buying cigarettes.

3. Increasing the number of people who successfully quit smoking. This includes increasing stop smoking services, reducing the number of shops selling cigarettes from 8,000 to under 500, lowering the nicotine content to make cigarettes less addictive and facilitating access to vaping products.

The role of vaping

The plan explicitly supports smokers who cannot quit to switch to less harmful alternatives such as vaping. It places aggressive restrictions on smoking while giving a significant advantage to vaping.

"Smoked tobacco products will be less available than vaping products, given their greater health impact"

“Vaping will not be restricted in where it can be sold, is allowed to be displayed in specialist shops, and will be permitted higher nicotine content”.

Prime Minister Jacinda Ardern has emphasised that vaping "works very successfully" as a quitting aid in New Zealand and is an important part of the plan.

Over the last 12 months, there has been an unprecedented 20% decline in adult smoking rates in New Zealand. This decline is likely to be almost entirely due to vaping as there have been no other significant tobacco policy changes during this time. 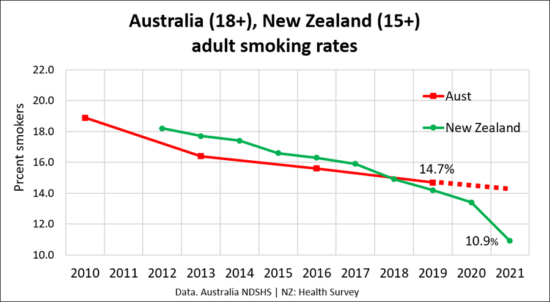 The Ministry of Health in New Zealand encourages the use of vaping as a quitting aid for smokers and has established websites to support it at www.vapingfacts.health.nz and https://www.quitstrong.nz/.

During the last 12 months, smoking rates in young people have also fallen sharply, being replaced by vaping, a much less harmful alternative. This is further evidence that vaping is a gateway OUT OF smoking. 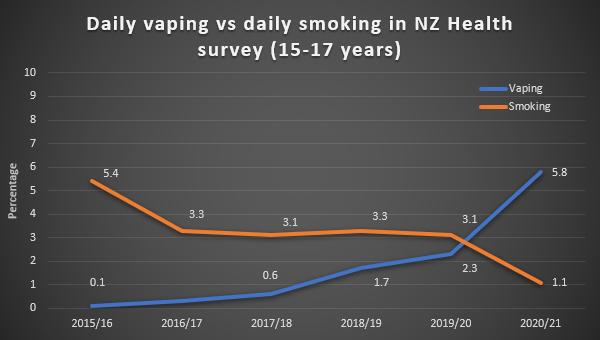 Australia’s approach is clearly designed to discourage vaping and this is reflected in our slowly declining smoking rate. Vaping in Australia involves a complex process of finding a doctor to write a prescription and ordering supplies from overseas or in some cases from a pharmacy.

It makes no sense to make the most popular and most effective quitting aid harder to access than deadly cigarettes which are freely available at over 20,000 outlets

Many of the strategies to reduce smoking in the NZ plan have been endlessly discussed in Australia, such as a smoke-free generation, reduced tobacco sales outlets, more smoking services, risk-proportionate regulation of vaping but nothing has changed.

Does our government really want to reduce smoking, or is the loss of $17 billion in annual tobacco tax and the political risk a bigger priority

21,000 Australians are still dying each year from smoking from lung cancer, heart and lung disease. If we really want to stop that we only need to look across the Tasman to see what needs to be done.