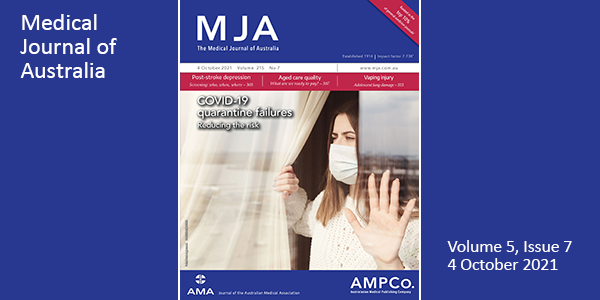 An article in the Medical Journal of Australia (MJA) last week confidently attributed a case of lung illness in Sydney to 'EVALI' from vaping nicotine. However, this case was almost certainly NOT EVALI and there is no evidence it was due to vaping.

Leading researcher and respiratory physician Professor Riccardo Polosa and I wrote a letter to the Medical Journal of Australia outlining why the diagnosis of EVALI was likely to be wrong. The letter was rejected by the editorial committee without going out for peer-review.

EVALI (e-cigarette or vaping product use-associated lung injury) is a serious lung condition which occurred in the United States from September 2019 to February 2020 and was caused by vitamin E acetate (VEA) which had been added to illicit THC (cannabis) vaping oils.

This case involved a Sydney adolescent who had been using illicit nicotine vaping products purchased from convenience stores. She developed urinary symptoms, initially treated with intravenous antibiotics. She went on to have “shadows in the lungs”, fluid at the base of the lungs and difficulty breathing. These lung findings can be caused by many conditions.

She was found to have THC in her urine test, related to the recent use of a cannabis water pipe. She denied vaping cannabis but had smoked tobacco for 7 months and taken a range of other drugs.

The episode was reported in the media where addiction specialist Dr Alex Wodak AM and respiratory physician Dr Eli Dabscheck expressed doubts about the diagnosis.

In our letter to the MJA, Professor Polosa and I gave 5 reasons why this illness was unlikely to be EVALI.

Firstly, vitamin E acetate (VEA) was not detected in the patient or in the vaporiser she had been using

During the EVALI outbreak in the US, VEA was identified in the lungs of most (but not all) cases. The timing and location of the outbreak were consistent with the use of VEA in illicit THC vaping products for that period and it has been accepted as the cause of EVALI. After the contaminated THC products with VEA were removed from the market, no further cases were reported (since February 2020).

In some cases in the US outbreak, nicotine vaping was suspected because some patients denied vaping cannabis. However, reporting was unreliable and many of these patients were later found to have vaped cannabis with VEA.

EVALI has not been clearly linked to nicotine vaping products. If vaping nicotine was the cause many more cases would have been reported before and after the outbreak, including in Sydney where this case occurred in September 2020

There are other possible explanations for this teen’s illness such as a lung infection due to smoking or urinary tract infection, which may have responded to the early use of intravenous antibiotics. It also could have been an allergic sensitisation reaction (eosinophils - allergy cells - were found in the chest fluid) or a toxic response to another undisclosed chemical. She had recently been smoking cannabis  and tobacco and using other medications.

In order to make a diagnosis of EVALI, all other lung conditions must be excluded. This includes passing a telescope into the lungs and taking samples (bronchoscopy and bronchial lavage). These tests can provide more information but were not done.

Why does this matter?

Falsely and confidently attributing this case to EVALI will discourage smokers from switching to vaping nicotine, with deadly results.

Previous studies have shown that blaming EVALI on nicotine vaping led to a significant and lasting increase in false concerns about the safety of vaping nicotine and reduced uptake by smokers.

Vaping is the most popular quitting method in Australia and is significantly more effective than nicotine replacement therapy. Although vaping nicotine is far safer than smoking, most people think it is as harmful as or more harmful than smoking. Inaccurate messaging by the media, health bodies and medical journals contribute to that widespread misinformation.

A statement by Australia’s Chief Medical Officer (CMO) on the Department of Health website in September 2019 falsely claimed that EVALI was linked to nicotine vaping. Thirty-one leading Australian health professionals sent a critical analysis of this flawed claim to the Chief Medical Officer asking for a correction in November 2019. However, the misinformation remains unchanged online.

Why was our letter not published?

The deputy editor of the MJA explained ‘the issues you raised in your letter have already been sufficiently covered in the original EVALI case report that you were commenting on."

This explanation makes no sense. The article confidently and unequivocally attributed this case to EVALI caused by vaping nicotine. We gave several evidence-based reasons why this was very unlikely.

The absence of a scientific reason for rejecting this letter raises questions about potential anti-vaping bias. Our contribution to the scientific debate was basically censored.

This is consistent with a pattern of rejection of pro-vaping articles submitted by me and co-authors to the Medical Journal of Australia and other Australian medical journals.

Australian medical journals need to be willing to present both sides of a controversial issue based on the evidence without political, ideological or other considerations. False and biased information about nicotine vaping will reduce the uptake of vaping and lead to unnecessary deaths.