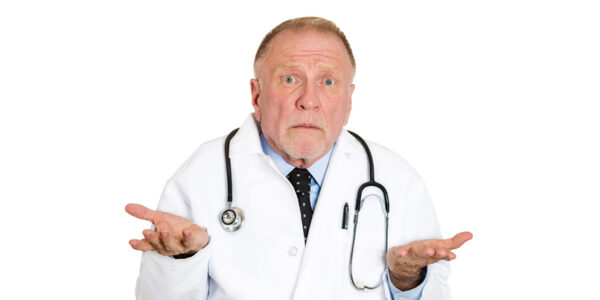 Some public health advocates seem more concerned about destroying tobacco companies than they are about improving public health.  In an article in today's Saturday Telegraph, zealots have attacked the training of doctors in tobacco harm reduction which will save lives, because it is funded by Big Tobacco.

Vaping is a legitimate quitting aid endorsed by Australian general practitioner and psychiatry Colleges and a wide variety of international health organisations. Vaping is the most popular and most effective quitting aid. However, there is very little training for Australian doctors in this lifesaving treatment. Doctors are the gatekeepers and need to be able to prescribe nicotine to allow legal vaping.

One medical group, Doctors on Demand, sought training from tobacco company Philip Morris International (PMI) to upskill doctors on vaping, but the outcry was as loud as it was predictable.

Australian Medical Association President Dr Khorshid sees this as a sinister conspiracy to ‘support the business model of Big Tobacco’ and ‘rejects any notion that smoking cessation was the motive behind vaping’.

Professor Simon Chapman also misses the point. He framed this medical education as ‘aiding and abetting a corporate makeover attempt by a tobacco company’, rather than as a legitimate attempt to train doctors to deliver a healthier alternative.

Let’s not be naive though. PMI is doing this for commercial reasons. They would much rather make highly profitable cigarettes. However, cigarettes are on the way out and if they don’t transition to the safer alternatives their business will disappear.

Tobacco company share prices fell by 50% from 2017-2020 as vaping and other reduced-risk products became popular, although they have started to rise again as opposition to these products has increased:

Let me be clear. I hate tobacco companies as much as anyone. Their long history of unethical behaviour lying, withholding information and blocking smoking reforms is appalling. However, they are slowly and steadily moving away from combustible tobacco to safer alternatives.

PMI’s stated objective is to generate more than 50% of its turnover from smoke-free products, by 2025 and it is well on its way to doing that, as this graph shows: 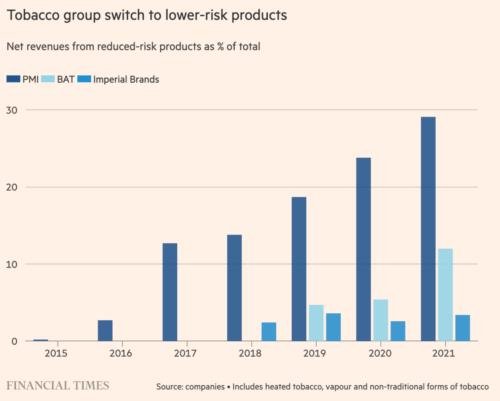 For once the goals of the tobacco companies and Public Health align. Less smoking and more vaping will save lives. We should encourage this transition, not obstruct it.

A twitter survey I did last year found that over 40% of vapers would choose a vaping product made by tobacco companies if it helped them quit smoking.

Irrational obstruction to the tobacco industry

Zealots remain focussed on punishing and blacklisting tobacco companies even when they are improving public health. According to Professor David Sweanor, lawyer and public health advocate, the 'reasoning' seems to be

"cigarette companies have caused huge levels of death and disease by selling an unnecessarily lethal product. The solution? To try to prevent these companies or any competitors from selling less hazardous ones, and thus kill more people"

Here are four other examples

1. The World Health Organisation announced recently it will “very likely” reject a Canadian-developed COVID-19 vaccine approved by Health Canada because Philip Morris International owns a minority share of the company.

2. PMI was also opposed when it attempted to purchase Vectura, which makes inhaled medicinal products. Similar objections were raised when it purchased OtiTopic, a pharmaceutical research company which makes an inhaler to treat heart attacks. PMI is trying to diversify and reduce reliance on combustibles. Would opponents prefer them to continue to exclusively make deadly cigarettes?

3. Another shocker was the attempt to blacklist leading researchers who have consulted with or received research grants from tobacco companies to develop less-risky tobacco products. The researchers explained:

“We do this because the goal of tobacco/nicotine science should be a reduction in tobacco-related morbidity and mortality, and that harm reduction products can play a major role in achieving this goal."

"If the tobacco industry seeks to make money by marketing reduced-risk products instead of more risky products, we fail to see this as a menace to public health. We believe industries’ investment in less-risky products is a clear sign they recognize their survival depends on such products. This shift is actually a tobacco control success story.”

4. In the early days of COVID-19, a tobacco company quietly donated 50 ventilators after being privately asked by the Greek government which then announced the gift. Then Tobacco Control vilified the Greek Government and the tobacco company! Better to let people die than accept a donation from Big Tobacco! [Alex Wodak]

“Then they should stop making cigarettes”

Opponents understandably say that tobacco companies should stop making, selling and promoting cigarettes, especially in low and middle income countries if they are serious about wanting to move away from deadly products.

However, we cannot stop this. Tobacco companies have a legal, fiduciary obligation to shareholders to maximise profits. If a CEO moves to stop cigarette sales, another CEO would step in to take over or other companies would fill the gap.

Instead, we need to support tobacco companies to develop alternative income streams, and tobacco sales will continue to fall.

Smoking remains the leading preventable cause of death globally, prematurely killing over 8 million people per year. Anything that helps to reduce this toll should be encouraged.

If tobacco companies move away from making deadly cigarettes that should be supported.

It doesn’t matter who makes safer products as long as they save lives.

How opponents of vaping aid and abet Big Tobacco. The Spectator 2020