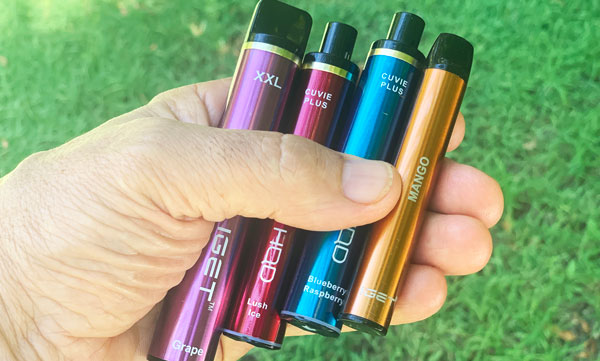 Youth vaping. The other side of the story

An article in the Daily Telegraph today breathlessly reported on the ‘teen vaping crisis’ and the danger to our children. However, the article exaggerated the risks, included misinformation and only told one side of the story.

There was no comment sought from a pro-vaping expert, so I will provide my response here for balance.

How widespread is teen vaping?

We don’t really know. There are anecdotal reports of increasing teen vaping from schools and parents due to the availability of illegal disposables.

However, the latest official survey in 2019 found that <2% of Australian teenagers vaped in 2019 and more than 90% had never tried vaping. Importantly, most vaping is infrequent and short-term and one in three young vapers do it only once or twice.

Most teens who try vaping are already smokers. Two out of three teens who vaped in 2017 had already smoked cigarettes before trying vaping. Regular vaping is mainly confined to teens who already smoke and is rare in non-smokers.

Youth vaping will likely be a short-term fad, like Pokemon or fidget spinners. In the US, youth vaping rates rose to a peak in 2019 and fell by 62% over the last 2 years.

What are teens vaping?

Teens are accessing illegal disposable nicotine vaping products imported from China. They are typically purchased for $2-3 each, shipped into Australia in containers and sold openly by tobacconists and convenience stores for $25-30 to all comers, including young people. The devices are also sold on social media and some kids sell them at schools.

Currently it is illegal in Australia to sell nicotine vapes or e-liquid (except through pharmacies on prescription).

These products are unregulated and we know very little about the chemicals they release. However, they contain high levels of nicotine, generally 5-6%. This level of nicotine can be helpful for smokers trying to quit, but could lead to nausea and vomiting in a non-smoker.

Does vaping lead to smoking?

Rather than being a gateway into smoking, the evidence suggests that vaping is diverting young people away from smoking. Some young people who would have smoked are taking up vaping instead and some smokers are using vaping to quit smoking. Recent studies have found that young people who try vaping first are less likely to go on to be smokers later than those who smoke first.

In other countries where vaping is readily available such as the US (graph below), UK and NZ, youth smoking rates are declining faster than ever, which is consistent with vaping being a gateway out of smoking. 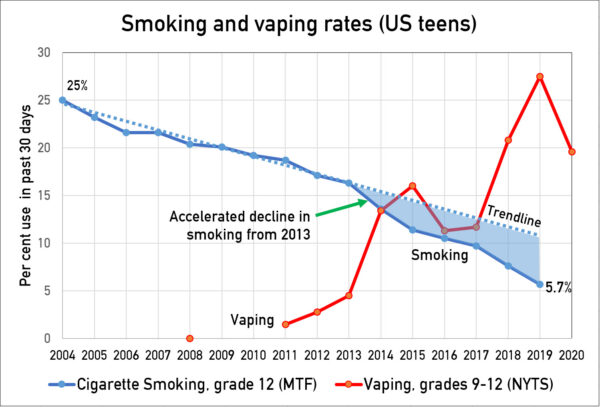 How harmful is youth vaping?

According to the article in the Daily Telegraph, “Vaping in adolescence can have devastating effects and lasting effects”. There is no evidence for this outrageous claim.

The article mentions a 'possible link between the use of e-cigarettes and lung disease' which caused some fatalities. This condition (EVALI) was caused by inhaled cannabis oils contaminated with Vitamin E Acetate, not nicotine vaping.

There is no evidence that nicotine harms the adolescent brain in humans as is often claimed. This effect has only been found in rodents and is not a reliable guide to harm in humans.

There is some evidence that vaping is associated with worsening of asthma and cough and lung irritation in non-smoking teens. There is a low risk of becoming dependent on nicotine, but the risk is less with infrequent vaping which is the main pattern of use.

There are also potential unknown long-term risks from vaping, but significant harms are unlikely, even if use continues for some years. Nearly all lasting harmful effects from smoking can be avoided by quitting before the age of thirty-five years. As vaping is far less risky than smoking, any permanent harm is likely to be delayed even longer and would be much less.

Young people more commonly engage in other risky behaviour which are far more harmful to health, such as binge drinking and use of other drugs. We need to keep concerns about vaping in perspective and in proportion to the harm it causes. It makes more sense to focus more on the most harmful behaviours and less on vaping.

The solution to youth vaping

Policing and enforcement of black-market sales to youth is almost non-existent and is unlikely to be effective anyway. Profitable illicit markets for a desired product just go underground.

The solution is to regulate nicotine vaping products as adult consumer products sold from licensed retail outlets where age-of-sale laws can be enforced. This would allow access for adult smokers who want to use vaping as a quitting aid and minimise access for young people. Tough penalties such as fines and loss of licence should apply to improve compliance with the regulations.

A regulated market would sell safe products to adults who are trying to quit smoking. The black market and sales to to teens would diminish.